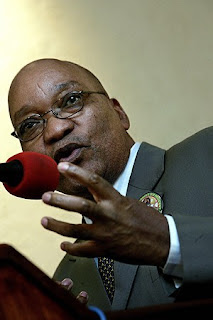 South Africa is facing its greatest upheaval since its historic leap towards democracy in 1994.

The elevation this week of the populist, charismatic and allegedly corrupt politician Jacob Zuma to the leadership of the ruling party threatens to take South Africa on a much more turbulent course.

Whoever leads the African National Congress is traditionally the party's presidential candidate. The party's overwhelming backing has ensured victories first for Nelson Mandela in '94, then Thabo Mbeki in 1999 and 2004.

The main opposition party called the ANC convention vote on Tuesday “dismal” for the ANC and for the nation; an indictment on the ruling party that they could find no better candidate than Zuma to lead it.

His rise also highlights a tribal fault line in South Africa similar to that dividing many liberation movements across Africa.

South Africa's President Mbeki, 65, is an aloof leader, a friend of big business accused of representing the black elite, while Zuma, also aged 65, is semi-illiterate and seen as speaking for the man on the street. But he is no saint.

While Nelson Mandela captured all that was honourable and good in the ANC, Zuma is something of an anti-hero. Archbishop Desmond Tutu has said he is a man without moral integrity.

This week Zuma loyalists won all five other top party posts. This puts him, a Zulu from the province of Kwazulu Natal (an area where the ANC has been traditionally weak due to the influence of the Zulu-backed Inkartha Freedom Party) on track to become the next president of South Africa in 2009, when the constitution requires Mbeki, a Xhosa speaker from the Transkei, to step down.

This contest then is, in part, tribal. Mandela is also Xhosa, so the Zulu have felt it is their turn. To many of them it is not about what Zuma may or may not stand for.

This is unfortunate, but a typical development in African politics. The fear is that this ethnic split, black against black, will become more visible within the ANC, which has wielded unmatched power since the end of apartheid.

But Zuma's win was a protest vote against the incumbent more than a vote for the former deputy.

Although Mbeki has presided the past decade over a period of sustained economic growth, his autocratic style and preference for spin withdrew him from the electorate.

In his first term in office after replacing Nelson Mandela, Mbeki constantly looked over his shoulder, imagining opponents breathing down his neck. In 2001 he accused his chief rival - Mandela’s preferred successor, the smart and engaging Cyril Ramaphosa, of conspiring to oust him from office.

For all his talk about ethical leadership Mbeki's has a secretive political style aimed at making himself untouchable. He has had a palpable dislike of the media (he rarely speaks to journalists) and he has appeared in parliament only infrequently.

Soon after Mbeki was handed the Presidency in 1999 he got rid of a key and impartial critic of his government, the incorruptible Frene Ginwala, the speaker of the National Assembly.

He courted the party that crafted apartheid. He offered former colonial masters in the National Party (NP), now in opposition, senior parliamentary posts - effectively disbanding the NP and silencing a rare voice of dissent.

Then there were his idiotic comments on HIV AIDS. Going against the scientific consensus he questioned the causal link between HIV and Aids, and the efficacy of anti-retroviral drugs such as AZT. He politicised the pandemic and delayed prevention and treatment for millions of people, many of them children.

South Africa has the world's highest number of AIDS victims and Mbeki's policy has proved to be downright neglectful.

Then there is his inability to improve the situation in neighbouring Zimbabwe. Even when Robert Mugabe was bulldozing the homes of his own citizens, forcing more than 250,000 onto the streets, Mbeki, was muted in his reaction. His deliberate policy of quiet diplomacy has failed to stop the destruction.

Mbeki comes across as cool and lacking the common touch. Though his university education and elegant suits charm outsiders, he cuts an awkward figure in the townships.

Zuma, unlike Mbeki, is seen as someone who did time in the trenches at significant personal cost. He is part of The Struggle mythology and he is cast as a warm, fatherly figure that the country must revere, regardless, it seems, of the allegations levelled against him.

Having said that, claims of corruption threaten to derail the new ANC leader.

Zuma's financial advisor Schabir Shaik is currently serving a 15-year prison sentence after he was found guilty of soliciting bribes on behalf of Zuma. The first corruption charges against Zuma were dropped last September when a judge threw them out of court after it emerged the state did not have enough evidence to convict him.

In a separate criminal case Zuma was accused of raping a 31-year HIV-positive woman. The accuser was a family friend. Zuma said it was consensual sex but admitted he did not use contraception. He was acquitted but the judge found it “totally unacceptable" for a man to have unprotected sex with a woman who was not his regular partner, especially knowing that she had the disease.

Zuma further outraged AIDS activists by testifying that he took a shower after the intercourse in the belief that it would protect him from the AIDS virus.

Zuma and his supporters claimed the rape charge was part of a political conspiracy to remove him as a candidate for South Africa' next president. Reports of nepotism and corruption within the ANC only heightened speculation that Zuma was a scapegoat. The sex scandal seemed to further endear Zuma to his fans. He was a real person capable of adultery, and someone the public could relate to more than President Mbeki.

Zuma's extraordinary popularity comes from the country's powerful trade unions and an increasing number of disenfranchised and absolute poor. Many of the country's 48 million people have not enjoyed the fruits of black majority rule and see Zuma has someone more in touch with their lives than Mbeki.

But will it translate into different policies to help the poor? Regarding national policies, Zuma has been careful to avoid rocking the boat. He has made no new promises other than that he will unite the party and the country.

His first official pronouncements as ANC president late this week were deliberately uncontroversial. “There is no reason why the domestic or international community or any other sector should be uneasy," Zuma said.

His backers, the Congress of South African Trade Unions (COSATU) and the South African Communist Party (SACP) also say there will be no policy changes and that Mbeki must stay on and finish his current term. But after years of harsh criticism of Mbeki's market orientated policies, that seems unlikely.

The militant left has tasted blood. With power confirmed through Zuma, it is emboldened and is likely to fight harder against Mbeki’s plan to liberalise labour laws to attract foreign investment.

The two groups, which form part of the governing alliance are demanding more state spending to help the poor and a letup in interest rate increases. Some commentators say Zuma, with his left connections, will frighten large numbers of middle class South Africans out of the country. The challenge is to pursue policies that support entrepreneurship and ensure South Africa is more socially and economically just.

There is a major ideological shift underway and it may have big consequences but not all of them potentially adverse. This was the first ANC leadership contest for 58 years and is either a sign of a healthy democracy in action or fears the split in the ANC could spell trouble for South Africa.

The ANC has a strong hold on the parliament with a majority of seats in all South Africa's nine provinces. So even this party split could result in a breakaway political group that actually builds dissent and democracy.