When Meat Is Off The Menu 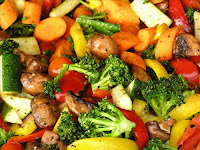 This week's ABC Four Corners revealed with gut-wrenching images, how cattle in slaughterhouses have suffered mistreatment. It's got my family again thinking about the responsibilities we have towards animals. I wrote this for Web Child last month:

There's a small revolution rippling along in suburbia, at least in my pocket of the suburbs. And my anecdotal evidence suggests that boys are leading the way. It's vegetarianism, and it contests the stereotype that boys are less sensitive than girls.

My seven-year-old son wants to be a vegetarian. His good friend is one. Others in his class have talked about wanting to forgo meat. They are all boys and they each came to this conclusion on their own.

“Mum, every time I eat meat, I feel sorry,” said Oliver, one day at the kitchen sink.

Oliver quite likes the taste of meat. He likes bacon and he'll happily chow down on spaghetti bolognese, especially the way his school canteen makes it. But, he explained to me with a worried face, “I love animals”.

What's curious is that Oliver has never wanted a pet; he could take or leave the idea of a four-legged friend. In fact, he's rather nervous around animals, and yet he has this profound compassion for them.

I should declare that Oliver’s father is a vegetarian and has been for decades. He decided to be so because he believes vegetarianism is more ecologically sound and ethical. But my husband came to that conclusion later in life. And he certainly has not forced that view on our children.

Today's children and young people seem far more sympathetic to taking up vegetarianism. I was never distressed about eating another animal, although my faith encourages gratitude for the lives of animals killed for our sake. When I was at university, there was a bunch of us who decided to give up meat for a time. It was a period when many of us were prepared to try new things and questioned what we did and ate. But today, people seem to be asking those questions at a much younger age.

Why? Perhaps it's because of the overwhelming science of climate change and an increasing awareness of one's own ecological footprint. As a community we are far more ready to study the labels of food we buy, and be conscious of what we eat, where it's grown and the energy costs of bringing it to us. Perhaps parental efforts to reduce the risks of obesity are also encouraging this change and generating conversations that are developing healthier and better informed kids.

Another potential factor is that a growing middle class is creating learning environments at home and school that enable children to find out about their world at a younger age. There are kitchen gardens in primary schools and a lot of focus on events like Earth Hour. Compared to my folks, parents today seem to dictate less and, instead, provide an abundance of resources to encourage children to develop their own ideas, interests and questions, and even to take on causes.

This was reflected in Oliver's preschool, which had the informal mantra of 'child-led learning'. Carers and educators introduced ideas for activities but the day was generally directed by the interests of the children. There were few boundaries and they were shaped by the language of 'good choices' over 'bad choices'.

No wonder children are thinking about the implications of what they put into their bodies far more than I did at a young age, even to the point where a child's choices can become burdensome for parents. I know from experience that cooking vegetarian meals is harder work. Gone are the days when my husband's parents disapproved of vegetarianism and refused to prepare anything beyond the 'meat and three veg' dinner. They believed it was just a fad.

As a family, we have decided that it's okay for Oliver to become a vegetarian when he is consistently prepared to have a more varied diet. He'll need to have more than his absolute favourite meal - pasta and melted cheese. There should be a willingness, we've argued, to try a variety of fruits, nuts, pulses and what we call 'more adventurous' vegies. He's not there yet. But thankfully, he understands this and has not decided to go on a hunger strike to exercise his personal will.