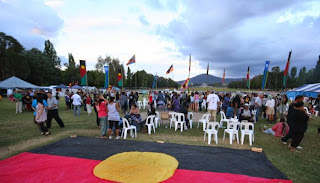 Into the symmetry and order of Canberra's parliamentary triangle on Monday will flow curry and chai, music, a rainbow tent with rugs and cushions, traditional healing workshops accompanied by a 'healing spirit' campfire billowing smoke.

Every January 26 Aboriginal people from all around Australia come to the lawn across from the old Parliament House for an annual corroboree supporting indigenous freedom, at what is arguably one of the world's longest 'occupy' sites in the world, Australia's Aboriginal Tent Embassy.

The fracas in 2012 when Julia Gillard lost a blue suede shoe, as a bodyguard whisked her away from the nearby Lobby Restaurant because of misplaced concerns about violence drew the media then, but only until the shoe was returned. (Incidentally, the woman wrongly accused of inciting the 'riot', the highly respected community leader Rosalie Kunoth-Monks, is this year's Northern Territory Australian of the Year and finalist in the national awards. She'll make the journey from flooded Utopia in the Northern Territory).
The people who'll gather this year will have fresh fire in their bellies put there by the Premier of Western Australia who wants to demolish at least 100 remote communities he says are non-viable. The visitors will also be energised by the First People's Freedom Summit held in Alice Spring in November – an outpouring of pain about the slow death of self-determination, and Australia's high indigenous incarceration and suicide rates, things that should chasten all of us.

Those at the gathering will be estranged from the high-profile Aboriginal leaders that carry more favour with the government of the day. That will be used against them. Most of the media will ignore them, troubled by the thought of divergent black views. Never mind that no group in Australia is homogeneous.

Australia Day will always sit uncomfortably for many of us if it continues to be celebrated on January 26. It's when the tall ships arrived in Port Jackson 227 years ago with the passengers who disembarked and stayed. Rather than uniting us, the day aggravates trauma and racism. It's an insult to generations burdened by displacement.

A Canberra grandmother describes one of the recent Australia Day eve concerts near Parliament House as "ugly". It was supposed to be alcohol-free but it wasn't. "Kids were smashed ... young people were tattooed with the Australian flag, celebrating white pride. I felt really sad," she said.

Others have different experiences (the concert on Sunday is promoted as family-friendly) but what will be on display is an undeniable slice of our national life. A 19-year old Canberra student tells me she makes a point of avoiding the concerts,"booze-ups", she calls them. "When you know a bit of Aboriginal history, Australia Day just gets me angry," she says.

In the United States the national day has nothing to do with the date the British arrived. July 4 marks the day North Americans freed themselves from the British. Will it take a republic until Australians celebrate a day that does not expose a fault line?

Many of us aren't fussed. Nothing can change the guns and germ warfare that decimated and dispossessed our first peoples. "I don't have a problem with Australia Day," says a friend. "1788 was a while ago and I had nothing to do with it. Everything comes from something else, like Christmas, loosely linked to a pagan festival. I'm not sure you'd find a national day that everyone could agree on." She"ll use the long weekend for gardening and for creating domestic order before the year cranks up.

In his searching and visionary book on leadership and conflict resolution, The Different Drum, M. Scott Peck, an American, asks whether there is a difference between 'healthy' and 'unhealthy' nationalism.

He says nations – a relatively new development in human history – at first want to puff up their chests and act as if they have no weaknesses. To move beyond this "national narcissism" they need to develop a sense of where they are heading.

What is our national trajectory, where are we heading? There was a time when Aboriginal people were not deemed worthy to vote. We've moved on from that and said 'sorry' but where do we go to next?

Rosalie Kunoth-Monks says the January 26 isn't a problem for her. "I'm not sweating about the day," she told me from Utopia. "What upsets me is a view that Australia began on that day. There is sovereignty in the hearts of Aboriginal people ... I don't want to be assimilated."

January 1 – the date Australia federated in 1901 – would be almost as problematic a choice for the national day as is January 26. Neither acknowledges the millennia of knowledge and tradition in our continent that dates back to the earliest days of humanity.

Maturity will come when we are able to draw on the complex truth of who we are. Only then will we find a language to express that richness.
Aboriginal history Australian politics reconciliation