Barefoot and passionate: reflections on the Lenten experience 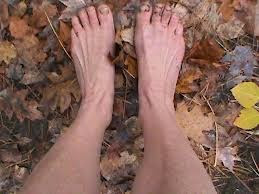 Ahead of Easter and the end of Lent I was delighted to discover an exquisite baroque sculpture by the Italian artist Gian Lorenzo Bernini. It's of St Teresa of Avila, the Spanish founder of the Discalced Carmelites. Google her. In a small Roman chapel St Teresa can be found, made of marble seated on clouds below an angel poised to pierce her heart with a dart. In her autobiography, Teresa describes this spiritual ecstasy as one that causes immense joy and pain; turning her "on fire with a great love of God".

Leaving aside Teresa's mystical encounter, I was curious to know why she was discalced, that is barefoot. The Discalced Carmelites, a Catholic order established in the late 1500s, understood that we experience the world and beyond through our bodies. Going without shoes, and in her case other comforts, was a sign that she relied on God to provide for her. It's a concept foreign to most of us. We strive to be independent. Going barefoot is associated with being carefree, aimless or a rough kind of life.

Many religious pilgrimages are completed barefoot. Walkers feel sharp rock, slippery mud or the biting cold of water. They have to adjust their sense of who they are and what the world is really like.

Can you imagine walking into Parliament House barefoot, feeling the floorboards and marble with your toes? We are not allowed to. Instead, we use heels and hard soles to make a thunderous noise that says "power".

Humility is at the heart of Maundy Thursday, the day before Good Friday. Jesus washed the feet of his disciples. It was the custom in ancient Palestine for people who had travelled in sandals on dusty roads to wash their feet upon arriving at someone's home. Hosts would assist guests as a sign of hospitality. On this day marked by Christians, Jesus took on the role of host and servant. In services across Canberra on Thursday the ritual will be repeated as leaders and parishioners pour water over, hold and dry the feet of each other. We can only imagine how communities would be transformed if leaders understood and were seen as hosts rather than heroes.

Although seen as a relic from a distant past, Lent is about linking our physical and spiritual selves. Many in the community used to observe a 40-day fast in the days leading up to Easter Sunday, giving up all rich food. These days there are other options. Pope Francis offers a tip. "Lent is a fitting time for self-denial; we would do well to ask ourselves what we can give up in order to help and enrich others by our own poverty."

Before the start of Lent, I asked my friends what they would be prepared to give up. My friend Sandy was going to abandon hot showers. He has done so each Lent for years. "It's not about giving something up but rather giving something back," he said.

"It's different if you have solar panels heating your water, but our system is electric. It's largely symbolic but I hope to be doing something for the environment." Hearing this, my 11-year-old gave up hot showers too. (The cooler Canberra evenings are proving quite a challenge.)

Another dear friend, Max, goes barefoot whatever the weather, whatever the occasion. (Although there are special events or exemptions. He wore shoes for my wedding.) The discipline, as with the Discalced Carmelites, has became a way of life, an "attempt to remind myself that I am on holy ground constantly as I encounter people ... to be careful, tread gently and act lovingly," says Max. Like stony paths, it's hard going.

So, what did I do this Lent? I tried to give up complaining, a persistent habit, almost a right, in our culture. I told myself: "In our society there are too many people throwing too many rocks". I didn't do well. Within days I was angrily critiquing federal policies.

Stephen Cherry, the Dean of King's College Cambridge, says that the problem with grumbling is that its dispiriting effect militates against the chances of taking positive action precisely when positive action is needed. That's the challenge: to spot grumbling coming, "a perverse kind of leisure activity that kills time, dampens enthusiasm and eradicates delight", and to take respectful action.

The mature and effective response to an injustice is not complaint but activism, not whingeing but clarifying that something is unacceptable and doing something about it. There was some of that this Lent. Cherry, like me, is a fan of protest, the likes of the kind seen in cities across Australia, drawing thousands of people last weekend over the treatment of asylum seekers*. "Protest is responsible and impassioned complaint," he says.

"But it is also vulnerable complaint. Protesters become emotional in prayer or interpersonal exchange and when they demonstrate in public they can, depending on the situation, be photographed, arrested or shot at. The same is never true of mere grumblers. Given the same circumstances, one person might grumble about it and the other mount a protest. It is the one who protests who becomes vulnerable."

*Tim Winton was among them, drawing on a key Gospel text at a Palm Sunday Walk for Justice for Refugees. The article was first published by Fairfax Media on April 2, 2015.