I Consume Therefore I Am? 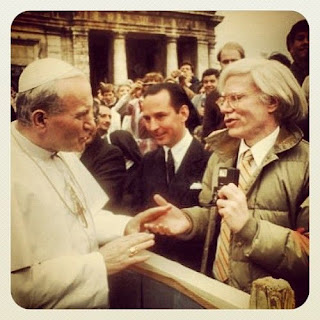 Buying is much more American than thinking, pop artist Andy Warhol once quipped. On last month’s visit to the United States, Catholic Pope Francis generated an enormous market for ‘things’, both spiritual and commercial.

It was thick with irony. While personally devoted to simplicity, Francis unleashed a hunger for products that surpassed what is usually associated with rock tours. New York was flooded with Pope posters, 'the Pope gives hope’ t-shirts, Pope caps, Pope bracelets and even Pope cheese that could be spread on Pope toast and then washed down with Pope beer. Instead of singing the hymn “The Great I Am” believers could have been singing “I Consume Therefore I Am”.

What is it about the human condition that makes us feel the need to bottle or wear things that are fleeting, even sacred, things that can’t be bottled or worn? Francis talks about being saved by the divine, of being in the world but not of it, yet all around him marketeers are offering objects that promise salvation in the form of material objects.

I get it. As a visual artist-in-training, I assume people will continue to want to put pictures on their walls. When I went to see Michael Jackson at the Sydney Entertainment Centre as a schoolgirl in the 1980s I just had to bring home something to keep the feeling going. It was a book full of posters of Jackson looking ‘bad’, sponsored by Pepsi. Now with teenagers of my own, I am reminded of the cultural pressures to frame our lives with products to shape our story.

We buy things because we can, because we want to and for what we think they can bring us. We want what surrounds them, the idea behind them. It happens when we are hollowed out spiritually. The less right we feel, the more we buy things that we think will make us right.

Corporations know this. They sell products associated with values in the hope that we will buy the products in order to buy the values.

Andy Warhol, who held a lifelong Catholic faith, understood it too, selling Marilyn Monroe and Elvis Presley prints and pictures of Brillo Boxes and Campbell's Soup cans. He was attacked for “capitulating” to consumerism but he was really doing was documenting the selling of identity. (When he wasn't making art, he worked in his congregation’s soup kitchen, the very opposite of selling out).

Spring is a good time to clean out our cupboards and shed those things we no longer need. There are garages throughout the suburbs just waiting to be liberated (Look out for the Majura School Spring Carnival and the National Garage Sale Trail on October 24). For me it’s also a time to think again about what I collect and why, to ask: ‘how much stuff is enough?’.

Pope Francis wants us to reflect on simplicity, on the virtues of modesty over show. You get the feeling that he is more interested in a battle with materialism than he is a battle over doctrine.

And it’s not only him. University researchers are increasingly interested in “voluntary radical simplicity” - a so-called middle way between over and under consumption. University of Melbourne researcher Dr Samuel Alexander describes it as the pursuit of “a sufficient standard of living” through non-material sources of wellbeing. As an example, he suggests exchanging some of our things for more free time.

He is promoting the idea of eco-villages that are “not escapist, but spaces to provoke thought and expand our ecological imaginations”. He says we shouldn’t forget the little things that reduce our footprint - walking to the shops, recycling, turning off the lights. But adds that we need creative and radical thinking that goes beyond simply giving up stuff.

It’s hardly a new idea. Alexander has harvested ideas from figures such as Buddha, Henry Thoreau and Jesus, who provoked his followers with “where your treasure is that is where your heart is also” (Old and contemporary prophets in all their shapes and sizes are like stones in our shoe, annoying but a potential gift).

We have become so wedded to consumption (those of us in Canberra are counting down to the opening of Ikea) that untangling ourselves from it is heavy going. Pope Francis may well have more success fighting sections of his Catholic Church over doctrine than he will in weaning the world off materialism.

The argument for easing back on acquisitions exists independently of arguments about the environment and climate change. It’s about living with ourselves and experiencing the profound and sacred rather than grasping at substitutes for it. Even if our consumption affected the rest of the world little it would be important to get it in perspective.