For education's sake, we should question NAPLAN 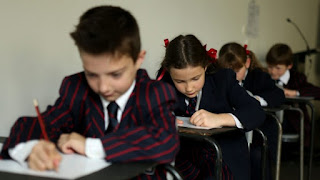 Parents be warned. As school resumes, there's escalating concern that NAPLAN, the annual assessment for students in years 3, 5, 7 and 9, is producing awful consequences.

In a new book sarcastically titled How to Pass a Test, long-time teacher Lynne Edwards begs readers not to pick up the so-called "education kits" now on sale in news agencies and post offices.

She says it's bad enough that NAPLAN and the preparation for it soaks up time that should be spent teaching but it's worse if parents further harass their children at home.

NAPLAN testing is supposed to improve the quality of education by producing data that can be used to redirect resources to areas of need.

But too often it is redirected to well-resourced parents, leaving poorly performing schools even worse off. (We know that the real issue is not the differences between schools but differences within schools as students at the same school struggle to all rise together with the tide.)

"Once a narrow testing system is given the high-stakes status attached to the MySchool website and then published in league tables, the distortion becomes detrimental and destructive," Edwards says.

Importantly, the results aren't even current. Delivered up to half a year later, NAPLAN results are practically useless as a feedback tool for students.

And, the testing regime puts unnecessary pressure on students and their teachers. One seasoned primary teacher in Sydney told me of a pupil who just panicked. "Kids feel that if they fail they are failing for life," she said.

The term "NAPLAN belly" has been coined to describe common ailments during the testing period. A survey commissioned by the University of Western Sydney's Whitlam Institute found students vomiting, crying and staying away. It concluded that NAPLAN harms students.

As a parent attending a welcome to high school last week, I was delighted by the school's emphasis on treating the student as a whole person. "School is about bettering yourself and learning about yourself," the year 7 co-ordinator said. "It's about supporting others too."

So it's frustrating to see Australia going down the US path of more and more tests. Edwards quotes Finland's director-general of education as saying the Australia/US approach is "an attempt to simplify a complicated issue and offer a quick fix". By de-emphasising arts and emphasising numeracy and literacy testing, they suck time away from diverse and creative learning, problem solving and risk taking.

Edwards urges Australia to emulate Finland, which has moved from an "old system" of grammar schools and civic schools to a comprehensive, inclusive system driven by co-operation and collaboration, research-based training and intense mentoring for teachers. Education is valued as a public good. Teaching in Finland has become as competitive and prestigious as professions in medicine or the law. The teaching profession attracts and retains talent. By contrast, teachers here lament losing colleagues amid poor working conditions.

It's a myth that NAPLAN and the MySchool website were needed because parents were not well informed. Tests were always a small but important part of student and classroom evaluations.

But one-size-fits all tests are "not the way teachers were trained to teach and it is not the way children learn", according Geoff Hastwell, a retired Adelaide teacher who is now a musician.

"We want our schools to be much more than test-prep paddocks, we want students to be exposed to the arts, and we want them to feel cared for," he says.

He wants teachers to unite to oppose it. "I'd like them to get together and declare: the emperor has no clothes, stop this!," he says, but admits he hopes in vain. "Their union is less strong. They are less courageous and won't speak up for fear of losing a promotion."

In the US, an entire profit-making machine has grown around NAPLAN-style tests. Firms that prepare, administer and provide evaluation of the tests enjoy financial success, despite many shortcomings.

An emeritus professor at the University of Southern California, linguist and educational researcher Stephen Krashen, says non-stop testing in his country is "sucking the blood out of education". There's no money for anything else. What really annoys him is that the testing regime has not been validated. As with mandated computer-use in schools, "there's been no control group".

It has provoked an "opt out" civil disobedience movement across every state of America against state-mandated testing. It includes students themselves deciding to boycott NAPLAN-style tests.

Here in Australia, at a time of rising deficits and reduced Commonwealth income, couldn't we consider spending less on standardised testing and on the things that matter? Yes to more funding for Gonksi. Education is an investment, not a cost. But this election year, let's bring on the debate about NAPLAN, too. Let's not move with the American public and be taken for a ride. In the very least, school principals and teachers owe it to their students to downplay the significance of the tests.