This Lent, why not give up speed, live in the present 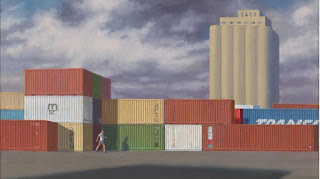 The landscape taking shape between Majura and Fyshwick has echoes of a Smart. There's something surreal about towering retail temples ribboned by hills dotted with sheep.

Bold fluorescent signs point to giant warehouses circled by grey car parks, like moats hugging corrugated exteriors. People move in and out of vehicles in an orderly fashion, dwarfed by the primary-coloured Ikea, Costco and Masters hardware store.

Ikea promises a kind of rebirth. Its thick catalogue soothes with new endless possibilities for clean and sunlit interiors. The rooms of our lives can be realigned. Just swipe your card.

So mesmerised are we that we imagine waking up the next morning blonde and living with less clutter, comforted inside one of the world's best welfare states, a Scandinavian country built around equality. Instead, we need a master's degree in orientation to take what feels like an endless air-conditioned tour, supplied with easily torn tape measures and the promise of meatballs.

But the best is yet to come when we are back home to assemble the flat pack, the enamel gloss a little chipped.

Seriously, what drove us to queue for hours at the opening late last year? We welcomed the world's largest furniture retailer like a childless aunt welcoming a baby. It was a gift to us rather than a sink for our wallet.

I think it has something to do with the notion that we can start again. And we don't need to wait. However complicated our lives, Ikea tells us we can have it all, right now and on budget.

The nearby giant warehouses tell us that big is better. "You can only make a saving if you buy 36 of those," a friend and Costco member jokes without a smile. "My husband came home with a bottle of sauce that big," she gesticulates. "I need extra real estate to house it."

I was lured into Costco once to help provide treats for a school fete. Their cakes are good for kids' parties. "They have cakes for Africa," my friend told me. The crazy thing is we don't need to be fed as much as Africa.

Back at Ikea, a beeper has gone off to ask a parent to pick up a child from Little Land. A helpful staff member steers an anxious parent back to her child, held semi-captive, via secret doorways as if entering Narnia.

Ikea gets to little people early with its own doll's house furniture that they can learn to love before they are ready for the big stuff.

It all sits oddly with the other popular social movement: living slowly, living simply and buying locally produced. There's an acronym for that one: LOHAS, or lifestyles of health and sustainability. It's formalised in such organisations as slow food, slow money, slow thinking, slow fitness and slow gardening. It incorporates the concepts of awareness, consciousness and concern for the greater good. Its concern is that modern life is cutting us off from our humanity. As someone once told me, "You can't love anything at speed."

Companion books are everywhere; those that invite mindful slow colouring in. LOHAS practitioners, many of them of faith, are reacting to a culture addicted to speed and convenience. They strive to be present, to make their own food. They more likely to choose cloth over disposable nappies.

"In modern society, once you've tasted convenience, it's hard to go back, but I feel better doing these things, even though it's a pain," one says. While she might save time using commercial products, she feels they rob her of something.

I understand the buzz about Ikea. It's a revolution in organising small spaces. Other companies are customising their goods to fit into Ikea spaces.

But instead of looking for new arrangements to organise our things, why not just get fewer things? We could eat less but eat more slowly, read less but read more slowly.

It's food for thought as Lent rolls around once again in preparation for Easter. Instead of giving up rich foods, a better idea might be to give up speed, to live each day rather than be caught up in it, to be present. It would erase boundaries between our roles as parents, mentors, citizens, workers, spiritual beings and shoppers.