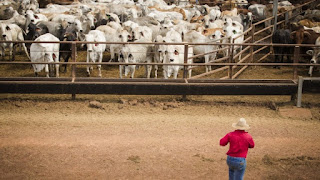 Elections are meant to help us decide what we think. But on one important issue we already know.

Opinion poll after opinion poll shows most of us want the bloody business of live animal exports stopped. It's our political leaders who are looking the other way.

When Four Corners revealed the cruelty of live exports in 2011, MPs were bombarded by correspondence from shocked viewers demanding change. The Gillard government responded by suspending live exports, but was quickly heavied by the industry and allowed live exports to resume with new standards to tackle mistreatment.

Its so-called Exporter Supply Chain Assurance Scheme improved conditions but they seem to have slipped back under Tony Abbott, which abolished the Department of Agriculture's live animal export division in 2014, within a year of expanding the live export trade to China. The department is responsible for promoting the trade and also regulating it, but now without the benefit of any serious advisory support.

The conditions and duration of sea voyages are unchanged. Advocates say abuse continues. Rates of stun-gun use are reportedly higher, but animals, sent to the Middle East and Asia are still subject to prolonged and painful deaths.

Bidda Jones, RSPCA Australia's chief scientist, and Julian Davies re-examine the issue in their book, Backlash – Australia's conflict of values over live exports. They argue for an ethical evaluation of the trade, so that any decisions to expand it actively consider the welfare standards in countries where risks exist. Decisions would be based on more than pure economics.

Federal independent MP Andrew Wilkie, who helped launch Backlash at the National Library last month, reckons that whenever he raises the issue, the response to his office is twice the size of any other issues, even that of asylum seekers.

"It is politicians who authorise the live export trade ... who have the power to stop shipments ... who make the laws regarding the corporations who run this trade," he said at the launch.

Wilkie believes very few of his federal colleagues understand or care that this is a systemically cruel trade: "There is no way to send sheep to the Middle East in the northern summer in any other way but a deeply cruel way."

Federal MPs here in the ACT are no doubt aware of the reservoir of concern in the Canberra community. Many MPs are uncomfortable with the trade. But letters of concern are redirected to Agriculture Minister Barnaby Joyce where they seem to disappear.

Even though it should be proud of its efforts to improve the sector, Labor's got little skin in the game these days. After the campaign against the trade peaked, it figures there's nothing to be gained by publicly arguing for strengthened protocols. It doesn't want to take a strong public position and risk looking greener than the Greens, nor inflame a more organised lobby.

Events of 2011 saw the mobilisation of the sector like never before with the agriculture industry presenting a unified front even though many members – sheep and cattle farmers – are against the live export trade. "You want to hope there is no animal-sympathetic entity to which we will all, one day, become accountable," wrote a rural constituent to the department in 2011, someone who grew up on a sheep and cattle station.

It seems only one issue at a time (asylum seekers) can claim the consciousness space. That's a shame but perhaps an election will see fresh faces prepared to take a stand (Labor's two most vocal opponents to the live export trade, Melissa Parke and Kelvin Thomson, are on their way out as are strong supporters of the sector, among them Joe Bullock).

What's unfathomable is that the live export industry has grown at the expense of the Australian processed-meat industry. "Even if these politicians don't care about the welfare of animals, you'd think they'd care about the numerous Australian workers who have been laid off," Wilkie said.

The live animal export industry is worth $1 billion. By comparison, international students contribute more than $16 billion in export income to the Australian economy.

The industry has been quick to dismiss the book as a "rear-view mirror" focus on the trade, offering reflections on the ban as a "comfort spot" for those opposed to the live export industry. But events five years ago are still contemporaneous. The arguments used to resume the trade were flimsy then and are flimsy still.

"The hollowness of that argument, incredibly, took hold in Australia," she said. "This is where the media comes out of the book rather poorly."

Before another election and a very expensive plebiscite on another issue already decided in the public's mind, let's do something about this one. Animals we export for slaughter overseas can't speak up for themselves. We had spoken up, and were pacified. We ought to speak up again.