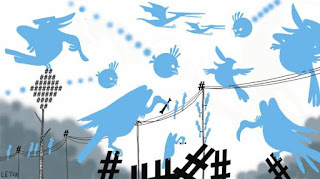 More than any previous election campaign this one will be won or lost using digital media.

Millions of us are wedded to Facebook. It's a vast digital kingdom that each party will try to conquer.

These days we are living more in our heads and less in the real world. We have fewer embodied and spontaneous experiences with strangers, and more disembodied ones, although usually with people we have chosen to follow; people whose political preferences align with our own. It's made us more tribal, more like the followers of Donald Trump, given us more blindspots.

The upside is that many of us are able to engage directly with members of Parliament, even the Prime Minister. And fact-checking is easier once you establish which sources to trust.

Meanwhile, journalists are under siege. Those on the campaign trail are tethered to devices that won't let them rest, and they are encouraged to use them to engage with the public when they've time to spare – time they would have once used to reflect. Sleepless parliamentary staff are chained to the same devices.

Campaigns impose their own structures: morning alerts, risk-averse and scripted events, hand-shaking and limited main-street and shopping mall encounters. Reporters look for the cracks and fault lines, but not for long as they'll need to move on, catch that bus before it takes off for another scheduled pseudo "engagement".

Parliamentary radio reporter Francis Keany vividly describes his life on the 2013 campaign trail in his new book Follow the Leaders: How to survive a modern day election campaign, launched last month. He survived thousands of kilometres travel, a bare-bones media budget and painfully long days with the wonders of over-the-counter medication, caffeine, rare family reunions and opportunities to speak to people outside the bubble of politics. The book is full of hurried, strange and surreal moments to the tune of slogans repeated ad nausea.

"The press conference begins and five minutes later the press release is issued, giving us zero time to digest a complex promise about a 1 per cent levy on big business to cover Abbott's controversial paid parental leave scheme ... Anger [among reporters] is clearly picked up by the microphones which is echoed by plenty of comments online," Keany notes of day three.

The new technology is incredibly useful. "You can quickly Google and fact check during a press conference, you can gauge reaction on Twitter and your bosses can listen into live feeds with suggested questions and quotes," he tells me. But he adds, that being tethered stifles him.

There's plenty to be concerned about in the rush to engage and compete in cyberspace. First of all, not everyone's equal in so-called "digital communities". They are echos of the real world and its biases. They over-represent celebrities and they over-represent men. Like ancient Greece, they are "democracies" made use of by the few. Genuinely needy people with little access to people of influence don't have the time to spare. Real barriers prevent those people that really need advocacy from being heard online.Even open forums are maintained by a dedicated and stubborn core of participants.

Journalists need to be careful not to treat Twitter and Facebook as if they represent the constituency. "The trick will be to recognise whether it's just another Twitter citizen arcing up, or whether it's a collective nerve that's been pinched," says Keany.

Political parties must be mindful their people (many Internet natives in similar garb) aren't sucked into staring at screens all day rather than door-knocking and holding face-to-face meetings with a diverse range of people. The appeal of digital communication is not only its potential reach but its low cost (as with online education, it's cheaper but probably not better).

The Internet has reshaped the public square, remodelled the old town hall meeting. For the media and for politicians it will be a balancing act between responding to the legitimate but often reactionary issues that arise on social media and aiming to maintain a holistic approach to the campaign with a consistency of character and a moral compass.

The wild and terrifying time that is a federal campaign is a test of endurance for all concerned, heightened in the digital age. Campaigns have never been simply about policy but about shaping identity. The pace of our digital culture further elevates colour over issues of substance and shrinks our capacity for sustained policy discussion. I hope to be proven wrong.