Twisted logic of an asylum policy now in disarray 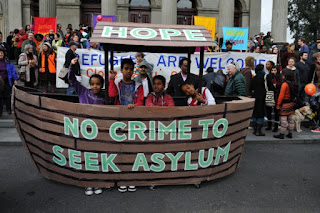 Papua New Guinea's decision to close the Manus Island detention centre after its Supreme Court unanimously declared it a denial of a right to personal liberty and illegal has been met with little more than a declaration that our government will never allow its residents to come to Australia.

Minister Peter Dutton's lines sounded well rehearsed. Regional processing and resettlement had stopped many people from losing their lives at sea. They also sounded false. It's a corrupted compassion that seeks to prevent drownings at sea but will tolerate what seems like indefinite life sentences for people who have committed no crimes.

Just this week Four Corners told us about one asylum seeker, Hamid Khazae, who paid the ultimate price. Doctors were key advocates in the program.

The first wave of health professionals to raise the alarm about care in detention centres spoke out as long as 15 years ago. I produced a documentary for ABC Radio National at the time, quoting the Australian Medical Association among others.

"There are inappropriate guidelines and inappropriate treatments available to people who are in detention.. Some of the concerns are the poor use of interpreters, particularly for those people in inadequate trauma counselling," said Kerryn Phelps.

Khazae was one of those who had no effective interpreter. Four Corners revealed that repeated medical advice about him was ignored and his care was unnecessarily delayed. Khazae died of a treatable bacterial infection.

The doctors who spoke to Four Corners have been threatened with jail for making this known. The Australian government contracts private firms to run the centres on foreign soil in environments far more secretive than those we tolerate at home.

"The level of abuse and trauma that's been visited on people within Australia at the moment, in future years is going to come to the same sort of situation as the apology for Aboriginal people," he said. (The lawyer who ran the PNG case suggests the Supreme Court ruling will spark compensation cases.)

Nine years later, McGorry's expertise in the field of mental health was acknowledged when he became Australian of the Year. He's deepened his view, calling the detention centres factories of mental illness.

Doctors have a long and honourable tradition of standing up for health. Most are united in their disgust, not only at the gag clause but at the conditions of detention.
When asked how she felt after being released from a Lebanese jail along with a 60 Minutes film crew this month, Brisbane mother Sally Faulkner was naturally delighted.

"They treated us well, we can't – we can't complain about that," she said. "But it's just, yeah, it's the uncertainty that sort of kept me awake at night, not knowing if it was gonna be a lifelong sentence or what. It was, yeah, it was no joke."

Faulkner was detained for two weeks. On average, asylum seekers in Australian offshore detention camps are detained for 450 days with no certainty as to when they will get out. One has been in for 1000 days. He can only dream of a bribe directed to the right place by Channel Nine or a snatch team rescue.

Few people seriously suggest Australia should not be able to detain irregular arrivals briefly on arrival in order to determine whether they pose a threat to society and to check on their identities.

But the process we've got now has no mechanism for ever releasing them within Australia or for preventing them sinking into despair. Many are intercepted young (the detainee who set himself alight on Nauru this week is just 23),vibrant and hopeful that on the strength of their story, they will get asylum. Months pass, the bureaucracy grinds on and more than half are indeed found to be genuine. Their cases are upheld but refugees enter the community after detention utterly demoralised, often severely ill, as a result of the experience.

Papua New Guineans, backed by their highest national court, understand the long-term costs of having said yes to Australia to accommodate the detention centre.
The centre created short-term jobs and some infrastructure. But as one PNG opposition member stressed, there was the good, the bad and the ugly. "In our hearts we knew it was not a long-term thing."

Meanwhile, Australia's policy is in disarray. No one likes to lose face especially when backed into a corner, so be prepared for tough talk from the government. Even though there is very little between the two major parties on asylum seeker policy, the Coalition is already using the PNG decision to scare voters and drive a wedge between it and Labor by conflating asylum seekers with terrorism.

After nearly decades of thorny debate, surely voters deserve a more sophisticated approach. A hardening towards asylum seekers would run counter to growing and grass-roots opposition to the policy, much of it in from across the Christian churches.

While the court ruling offers another arrow in the long campaign for change, it also fractures the appearance of cohesion in the federal Labor Party. Those cracks will be exploited by a desperate government.