Trump a test for Christianity and Christians everywhere

- February 11, 2017
A cartoon about President Donald Trump's America seen on Twitter shows a large Trump-like woman draped in the US flag holding a Bible in one hand while pointing menacingly into the face of a ragged and unconscious coloured child. "All lives matter!" she says. "Now stay the hell out of my country."

A majority of evangelical Christians and Catholics may have backed Trump, but in the wake of the attempt to ban refugees and immigrants from majority Muslim countries, many Christians have swung against him. 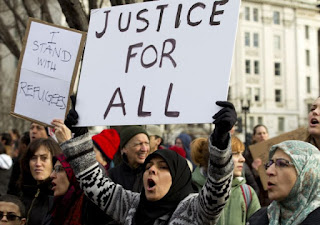 "We're a church that welcomes all people and so we will continue to do that. That's who we are," Washington DC pastor Dave Schmidgall told Australia's ABC. His congregation runs a refugee responder team. They are among millions appalled by the ban, stunned by Trump's indifference.

Ann Voskamp, a Christian author with a large conservative audience, boycotted the recent national prayer breakfast to protest against the immigration executive order. "We're called to love our neighbour without exception," she told Yahoo News. "Compassion and security don't have to be mutually exclusive. I know how the refugee resettlement program works. I know how thorough the vetting is."

Michael Wear, who advised former president Barack Obama on faith issues, marched beside her. "Especially as Donald Trump is receiving a lot of acclaim from some portions of the religious community for his Supreme Court nomination, it was important that the message was sent that we're not forgetting about this," he said. "We're going to affirm when he does good and we're going to stand up when he does wrong ... I'm glad to be outside the breakfast this year."

Hundreds of clergy have signed a letter condemning the "derogatory language that has been used about Middle Eastern refugees and our Muslim friends", urging Trump to lift the refugee ban because it violates essential religious commitments from many faith traditions. Here in Canberra, the Canberra Refugee Action Committee's Faith-Based Working Group echoed that sentiment, unanimously adopting a resolution rejecting Trump's preferential treatment of Christian refugees.

Conservative Christians have long aligned themselves to the radical right for reasons that have little to do with Jesus' teaching. Sidelined by the rise of secularism, they've weighed into cultural wars (increasingly backed, it's claimed, by big corporations) over things such as abortion and affirmative action to shore up their influence. Theological principles have been lost to cultural propositions.

Once proudly conservative, Rick Warren leads the Saddleback Church in California, the nation's sixth-biggest. In his autobiography, he laments his own attachment to these cultural wars, saying it was a distraction from Jesus' central message. The Bible he was taught as a young man played down biblical demands for social justice.

Conservative Christians draw headlines because of the noise they make and their ability to paint things in black and white. When less-dogmatic theologians respond and point out that Trump, a self-declared "proud Presbyterian", isn't a regular churchgoer and talks about himself when asked about God and faith, the established cultural warriors of the religious right shrug it off.

The editor of Sojourners magazine, Jim Wallis, says whether you're Christian or not, most people know Jesus was not pro-rich, pro-war or pro-American.

What is at stake is the very notion of human dignity. As the former Archbishop of Canterbury, Rowan Williams, puts it, respecting humans means being able "to look at any and every human individual and say that the same kind of mystery is true of all of them and therefore the same kind of reverence and attention is due to all of them".

Without that conviction, we are in trouble. We conflate security with refugees and with Islam, we condemn an entire people, or entire nations.

Williams worries that Trump won't be reined in by either bureaucrats or Congress. He warned before January that the force of Trump's personality would generate "a hectic climate of plans and half-plans, expenditure and public rhetoric, that will be almost as damaging as the projects themselves".

He and many other secular and religious leaders are calling for investment in local civic activism as a response, channeling outrage on social media and extraordinary street protests into strategic organising and collective action. That includes civil resistance, consumer boycotts, labour strikes and go-slow tactics alongside institutional approaches, such as court cases to defend and advance political and economic rights. But above all, to grow inclusive real-world communities that find time to reflect and show love in action.