Showing posts from March, 2017
Show all

The power of lament and song 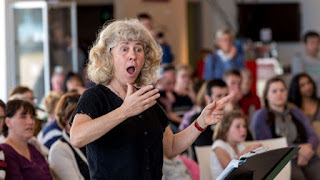 The idea of lament feels strange as it is ancient. There are images of it in biblical times, of people wailing and gnashing their teeth.

It feels like the season for wailing now: wailing about the demise of positive politics, about political strategy trumping real solutions and about the early death of human rights. Haven't there always been things to wail about? Yes, but now we live with unceasing streams of media exposing us to the world's pain as never before and an ugly kind of tribal politics that makes resolving differences seem impossible.

Song is a place to go, to sit with lament and to release it.

Canberra's Chorus of Women sprang out of a deep lament in 2003 as prime minister John Howard took Australia to war in Iraq, despite an overwhelming majority of Australians opposing it.

About 150 women, not then a formal group, broke into song in the marble foyer of Parliament House. They cried in unaccompanied song for the people of Iraq, the inevitability of death, and …
Read more »
More posts