School is much more than marks 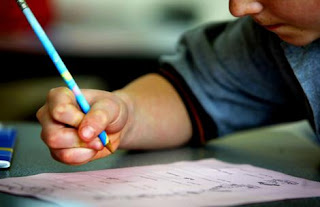 It came as a surprise earlier this year to see a full-page advertisement by a Canberra private girls high school boasting about the academic success of its high achievers.

Each student was shown with her Australian tertiary admission rank score and the name of the university she was accepted into.

(Private schools don't have the field to themselves. A number of public schools have better results, and at least one parades them on its website.)

I know schools have always been competitive, and I know ATAR scores mean something, but in a month in which thousands of Australian students sat their national literacy and numeracy tests, it's worth asking whether more tests and a greater emphasis on test results actually harms us.

An Australian National University lecturer told me recently about a number of first-year students who were so worried about attaining high marks they were paralysed and unable to start assignments. "This is the time of their lives when everything should be low-stakes," she said.

Year 12 scores are a far from perfect predictor of professional success and an even less perfect predictor of personal contentment. They tell us little about so-called "soft skills", such as getting on with people and developing decent and mutually supportive relationships. They tell us little about the employability of young people and their capacity to take part in and contribute to society.

When students are told that marks are more important than anything else, they can lose perspective. On an SBS Insight program, former high-performing students who left school were asked about their lives. Liesel described the stress she felt because she got up at 7am, rather than 5am as she used to for her HSC.

Psychologist Rebekka Tuqiri says pressure is good when it motivates us, but too much of it damages our brains and prevents us from performing well. The answer isn't to avoid stress, but to build resilience.

At a symposium on mental health at the ANU this month, students and staff tried to come up with a definition of resilience. The one they liked best was "the ability to bounce back". The seminar heard of a radical proposal (an idea only) to ditch the usual system of grades for first-year students and instead award only a "pass" or a "fail" so they felt less pressured and able to collaborate, experiment and even play.

Our experiences in homes and offices tell us that openness and cooperation help make things work. Complex cooperation (the kind that is needed in increasingly complex workplaces) requires practice and skill. "Modern society is really, ironically, deskilling people from many of the competences they need to deal with a very complex world," says sociologist Richard Sennett (author of Together: The Rituals, Pleasures and Politics of Cooperation). He wants classrooms to more often arrange themselves into groups of students who study together and talk about what they are learning face to face.

Our headlong rush into isolating technologies makes this more difficult, but Sennett finds that, where collaborative and face-to-face study happens, students are better able to communicate and less accepting of economic inequality. As he puts it: the more unequal a society is, the less social it is.

At a forum on student engagement and success organised by my local Parents & Citizens Association this year, parents were divided into groups and asked three questions about what they wanted for their children by the end of high school:

No one in my group said they wanted top marks.

Instead, we wanted them to be resourceful, to have learned to solve problems and to be able to self-reflect, set goals and engage others with compassion.

In science circles, showing compassion is referred to as being 'prosocial' (in the field of social genomics). It's an area of interest for Steven Cole, a professor of medicine at the University of California. He has studied what he calls "resilience factors" that protect our biology from difficult times.

The key, he says, is pursuing in a sustained way a cause that's greater than one's immediate gratification. "It's the kind of happiness that comes from creating stuff and trying to make the world a better place. The body works better, is more robust when it's attached to a mind with a big focal goal and magnificent purpose."

A magnificent purpose needn't be lofty. It simply involves a project that is self-transcendent; one that takes us out of ourselves.


First published in The Canberra Times, 19 May, 2017. More more information on the importance of soft and life skills for empowering young people to flourish, see this useful guide: