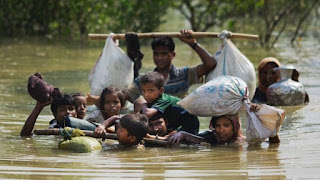 Imagine the entire population of Canberra driven from their homes in mere weeks. That's the scale of what's happening in predominantly Buddhist Myanmar, once known as Burma. More than 300,000 persecuted Muslim Rohingya were forced to leave their torched villages in the past month.

Australia's response has been a disgrace, all the more so amid our campaign for a seat on the United Nations Human Rights Council. We've offered just $5 million to the emergency relief effort, a pittance compared to the $122 million we are spending surveying opinions on whether same sex-couples should be able to marry.

Australia is the richest kid on the block. This is our region.

The Rohingya have been persecuted for years because of their darker skin and different religion. There have been forced displacements dating back to the 1990s. In February this year, a UN report documented mass gang-rapes, killings, the murder of babies, young children and their parents, and disappearances at what appears to be the hands of Myanmar's security forces. The Turnbull government only reluctantly backed an international investigation, and then only after significant pressure.

The Australia government is in Myanmar providing defence training through ASEAN. Leveraging that we could offer to convene peace talks, or at least help facilitate them, find creative solutions.

We could bolster hope with increased diplomacy, help stop the violence, support reconciliation. We could be asking Muslim nations in the region, namely Indonesia and Malaysia, to step up. The Rohingya want international peacekeeping forces. Where's Australia? This week, the Turnbull government celebrated our peacekeepers by opening a new memorial, with the message that international peace and security does not begin with going to war.

We could adopt the Greens' suggestion and take in many more refugees made homeless through no fault of their own. Amnesty International says just 37 Rohingya have been resettled in Australia since 2013, even though about 200,000 have been waiting in squalid refugee camps on the Bangladesh border for years. That they are Muslim might have made them a lower priority.

It would be a humanitarian as well as a strategic gesture. Sidney Jones, of the Jakarta-based Institute for Policy Analysis of Conflict, has long identified the emergence of extremism among isolated Rohingya. A new insurgent group emerged last year calling itself the Arakan Rohingya Salvation Army (ARSA). ARSA's attacks against police posts last month appear to have sparked the latest brutal crackdown.

When pressed about resettling more Rohingya refugees this week, Bishop pointed to the $5 million that was on its way.

"The donation is welcome, but it will not change things," said Habid Urahman, a refugee who fled Myanmar 20 years ago and now lives in Melbourne. It is like treating a wound but not the cause of the infection.

Urahman is profoundly disappointed that Myanmar's leading politician, Aung San Suu Kyi, whose National League of Democracy won most seats in the 2015 election, has been silent. "She does not speak for any minorities under attack," he tells me. "Worse, she has denied crimes on the ground. It's completely unacceptable. She's blocked international media from visiting."

The Nobel peace laureate is different now that she is in power. "She wants to stay in power. She was in house arrest for 20 years and she sacrificed her life, confronting the military junta. We've seen her bravery in the past, yet now she is siding with the military."

What's tragic is this crisis was predictable. On the surface, predominantly Buddhist Myanmar looks to be an emerging democracy but has no record of a commitment to human rights or multiculturalism. It continues to refuse to grant citizenship to the Rohingya (a word the government has officially banned) even though they have lived there for generations, as far back as the ninth century.

The military appoints 25 per cent of the parliament. If unquestioned, a wider campaign terrorising people of all minority faiths will intensify. Myanmar's generals have spent years building alliances to fight them.

We are intelligent. We ought to learn from history: the genocide in Rwanda and, before that, Germany. Just as the Nazis accused Jews of causing Germany's problems, anti-Rohingya military-backed assailants appear to be doing the Myanmar government's dirty work. They are reported to be have burned down houses while wearing Muslim dress to confuse the victims.

The harassed Rohingya who stay have their villages surrounded. They are blocked from accessing electricity and water, medical treatment, food sources, including fishing waters, and state education. By not helping integrate them, Myanmar has made the Rohingya rely on mosques for an inadequate and potentially radicalising education, while heightening anger and prejudice against them.

The UN has long provided evidence of the plight of these people. What more does Australia need to do more?