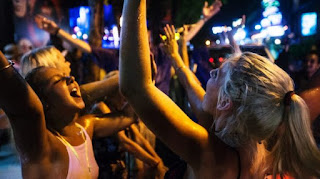 It's the schoolies week season. Not taking any risks, an acquaintance with a 17-year old daughter booked a trip for her and her friend to a tropical island, each with their father. Anything to avoid an underage booze-up.

It's that time of year when there's a rash of parties that provide alcohol to children. The school formals are (meant to be) alcohol-free but the pre and post-formal parties are not.

It's well-established that consuming alcohol early in life, right up to age 21, damages developing brains. Early consumption seems to lead to alcohol-dependence and other problems later in life.

Supervised drinking isn't safe either. Studies show that when parents supply alcohol at children's celebrations, thinking they are teaching them about control, they actually encourage heavier drinking. Exposure to alcohol leads to drinking.

The message seems to be getting through. Official statistics show Australian teenagers are drinking less and start to drink alcohol later. They are even abstaining from alcohol when their parents didn't.

The Australian Institute of Health and Welfare says the average age that Australians tried alcohol for the first time (usually pre-mixed spirits) rose from 14.7 in 2001 to 16.1 in 2016. The proportion of Aussie teens aged 14 to 17 who binge drink halved over the past 13 years. The proportion of abstainers more than doubled.

The decline is in line with what's happening in Britain, Sweden and New Zealand.

Why is it happening? No one really knows, but we can guess.

A report by Britain's Institute of Alcohol Studies credits better parenting. Parents are themselves drinking less, showing disapproval of children's drinking, and developing warmer and more open relationships with their children.

The Institute finds little evidence for the popular notion that the trend is driven by new technology (and that young people have less disposable income because of smartphones). In fact, "children who spend more time online and on social media may be more likely to drink".

The fact that any child drinks remains a worry. The alcohol industry says we shouldn't worry because children are drinking less. There's no need for tougher regulation.

Michael Thorne, of the Canberra-based Foundation for Alcohol Research and Education, says the industry takes advantage of gaps in regulation. "There is now a mounting and irrefutable body of evidence that points to the ways in which the alcohol industry very deliberately markets alcohol to children," he says. "Like tobacco before it, it's a dying industry if it can't recruit new customers."

Letting your hair down with a drink is fine, but you're an important role model for your kids.

Demonstrating the success of this marketing, the drinks of choice for 12 to 17-year-olds are "alcopops", not low-alcohol beer.

The foundation will argue a lot more needs to be done when it marks, later this month, the 40th anniversary of the release of the Senate standing committee on social welfare's report, Drug Problems in Australia – an intoxicated society? The report's publication in 1977, championed by the then Liberal senator and doctor Peter Baume, is considered a watershed moment in acknowledging both alcohol as a major drug of abuse and the importance of harm minimisation.

As we get into a more celebratory mood this summer, it's timely to be reminded that letting your hair down with a drink is fine, but you're undoubtedly an important role model for your kids.

Further, if your child is not finishing secondary school just yet, consider the need for new rites of passage that break the myth that a celebration is not a celebration without grog and getting smashed. Not-for-profits working in developing countries are increasingly offering volunteer-work holidays that ensure young people have a fun adventure that expands their horizons and changes lives for the better.