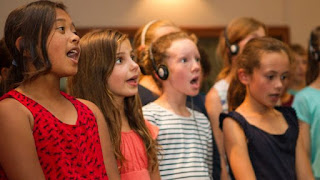 John, a primary school pupil in Canberra's south, was doing badly. At times disruptive and appearing uncaring or unaware of others' feelings, he was at risk of falling behind.

Then, over just a few weeks, he and peers learnt songs as part an outreach activity with the music engagement program. The aim was to sing with residents of a local retirement home.

The program was funded by the ACT government and run out of the Australian National University's School of Music. Its staff stressed that learning the songs was more important than getting them right. Accuracy can get in the way of what's natural.

Even so, John's teachers doubted he would do well. The day before the excursion to St Andrews Village in Hughes, the rehearsal was a lesson in chaos. John pulled faces, swore and made rude finger gestures.

On the big day, much to the surprise of those who were there, John needed little or no behaviour management. Video of the 45-minute session shows him talking to residents between songs, asking and answering questions. At one point, he notices that one has dropped her walking stick and runs over to pick it up. His behaviour towards others "was uniformly positive, gentle and polite".

What changed? The singing excursion turned him from being "helped" into a "helper", moving him from receiving help to providing it.

He is just one of tens of thousands of students the program has enriched. In 2008, it was recognised with a community music award from the Music Council of Australia. It is listed in a United Nations compendium called Music as a Global Resource, which showcases the ways in which music is used to address social problems around the world.

After their visit to St Andrews Village, John and his fellow students continued to behave and respond in a better way. An especially aggressive student, Robert (described as "likely to hurt people") said about the residents: "I love them, they're lovely people."

In the evaluation, a classroom teacher enthused: "The nursing home visit was nothing short of a miracle ... I was particularly surprised at John ... He finds it difficult to be in a group at all ... John overcame his shyness ... They were given a different sense of who they are."

For nearly two decades, the music engagement program was funded by the ACT government through artsACT. Until late last year. The week before Christmas, it was told it was being defunded – all of it, the entire $400,000 grant. Staff had known it was under review but had been led to believe a new contract was being finalised. It has come as a shock.

The reason given by artsACT was that the program did not fit with the agency's "mission". It's odd, given that the current ACT Arts Policy (2015) has as its the core principle "participation in and access to the arts".

Building caring communities is in everyone's interest. Research suggests generosity flows from high self-esteem. The music engagement program has shown that the opposite is also true; that allowing children to engage in helping behaviours in a supportive environment can improve children's self-esteem.

The National Tertiary Education Union has expressed dismay on behalf of affected union members. It says the decision will have a detrimental effect on thousands of community members, including students with special needs, nursing home residents, families and community groups.

The program was due to celebrate its 20th birthday. "While this is terrible news for our members, they are eager to see the survival of the program in some form. We join them in calling on the ACT government to restore funding to this vital community program," the union says.

No program has a right to be funded for perpetuity. But, as yet, artsACT has not provided a public statement. While I understand the agency has sought to refocus resources to engage more Aboriginal and Torres Strait Islander people and reflect a new direction at the ANU school of music, it's important that the Barr government explains how the money that used to fund the program will be used instead.

It was a world-class program that made a difference. It has been scratched with little or no consultation outside of the ANU. It would be great if, for our sake, it could be kept alive by new financial backers who understand its continuing worth.