The slow and sincere journey towards reconciliation 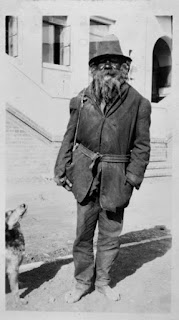 Two Wiradjuri men, Jimmy Clements (also known as ‘King Billy’, pictured) and John Noble (known as ‘Marvellous’) walked for a week from Brungle mission in the Riverina. On arrival they insisted on meeting the Duke and Duchess of York who were there to declare it open. They told a newspaper they wanted to make it clear they had “sovereign rights to the Federal Territory”.

The same newspaper reported some years later that when Noble was in trouble with white man’s law he stood up in court and said to the judge something like: “If it wasn't for Jimmy Cook you wouldn't be sitting where you are and I wouldn't be standing where I am”.

Nine decades on, there’s finally some momentum for a treaty, at least at the state level.

Victoria, led by Labor’s Daniel Andrews, is the most advanced, having appointed a treaty commissioner to create an Aboriginal representative body to begin the process. The Northern Territory has signed a memorandum of understanding that pledges to work towards a treaty. The ACT government is doing nothing, despite its progressive history.

The Turnbull Coalition government isn’t doing anything either. That’s despite the fact that one of its own, former prime minister Malcolm Fraser, funded the then National Aboriginal Consultative Committee to start work on a Treaty.

Turnbull seems out of step with national sentiment. A year on from the Uluru Statement from the Heart in which Indigenous leaders from all over Australia came up with a version of a treaty, polling released by the Australia Institute this month shows more than half of voters support starting a nation-wide process of agreement or treaty making, with 26 per cent opposed.

Forty six per cent support enshrining a First Nations Voice in the Constitution, 29% oppose it. Many Aboriginal leaders themselves don’t want constitutional recognition. They say it would undermine their political independence.

Meanwhile, the difficult business of making peace with the past goes on in in fits and starts - in workplaces, pubs, homes, towns and cities. The plan to build yet another monument to James Cook; a so-called discovery centre at Botany Bay, is just another of the things that get in the way. A long-time activist in Canberra told me she doesn’t know where to walk because the country is still “strewn with unmarked graves and massacre sites.”

At Reconciliation Week events this year I was stunned to hear that at Queanbeyan Public School children sang and spoke about the Frontier Wars. It couldn’t have happened a few years back.

I was also moved to hear the story of Bob Slockee, a Canberra man who grew up at Bateman’s Bay, identifying as Walbunja as well as Irish and English “So I think I’m Australian,” he quipped.

Slockee is with Australians Together, a nonprofit organisation that creates ‘safe spaces’ for Indigenous and non-Indigenous people listen to each other.

“I’ve had a massive journey,” he told me. “Reconciliation for me personally doesn’t hit the mark. It assumes an original good relationship. But that didn’t happen at the outset. It’s more about conciliation and finding steps to come together.”

Slockee is comfortable expressing a love of God as a Christian with his own deep Aboriginal spirituality.

He says he moved beyond his own anger about the violence against and mistreatment of Aboriginals peoples when he realised that his white ancestors had suffered too. “Those convicts were taken away from their families, lived with trauma of their own,” he said. “We have a shared history.”