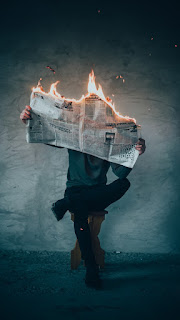 History is littered with examples where propaganda has led to appalling acts of violence.

That's why the rise of social media in the hands of extreme groups is a deep concern, as is the role of public figures in potentially inflaming hate.

Who could forget Rwanda. Twenty-five years ago this month the world heard of the genocide against the Tutsi. I was in South Africa covering that country's historic election of Nelson Mandela, a moment of euphoria, when shocking news trickled in of the mass murder of up to 70 per cent of Rwanda's Tutsi people by members of the Hutu majority.

Civil war had been brewing in Rwanda before April, 1994. But the use of the media in skilled hands brought ordinary people, who had lived together for hundred of years, to extreme violence.

The Tutsi were labelled as demons, rich and avaricious, out to get the Hutu. The Hutu were called on to kill members of a Tutsi rebel group that threatened the government, and their "accomplices" - women and children.

A private radio station founded by the president's party played a key role. It exploited and exacerbated small tensions in powerful and provocative style. When a plane crash killed Rwanda's Hutu President, the ground was already prepared to incite the killing of those "cockroaches", as the Tutsi were called.

Within months the International War Crimes Tribunal began trials. One, known as the "media trial", pursued a newspaper and a radio station for inciting genocide. It determined that what was said, (things like, "we know the enemy, we know them by their narrow nose, break that nose") was said with intent.

The trials discovered that the behind the broadcasts were intelligent people pulling the strings, just as trials after World War II that pursued justice for the million or more Jews killed in Europe discovered that the people who headed Germany's propaganda unit had doctorates.

We often think of social media as a Western phenomenon. But with the rise of personal devices, its uptake is rapid everywhere. The United Nations has found that the military in Myanmar used social media to incite violence against the Muslim Rohingya by soldiers and the militia recruited in the Buddhist population. The strategy to kill and displace thousands of people did not evolve overnight. As in Rwanda, people in power executed long-held plans.

So we shouldn't underestimate the power of powerful people to do it here.

The Australian government's crackdown on social media companies after Christchurch, threatening jail for executives that don't remove live streaming of violent crime, is to be applauded. But violence can be incited by old as well as new media.

Visiting Australia last week for the 25th anniversary of the Rwandan genocide was American lawyer Stephen Rapp. Rapp is a former United States ambassador-at-large for war crimes issues in the Office of Global Criminal Justice. He said he was in no doubt there were parallels between the Rwandan and Myanmar genocides and the Christchurch massacre.

Social media, he told the ABC, "are powerful means to build hatreds and to prepare people for violence". Social media allows players in politics - in the broadest sense -greater capacity to target individuals with tailored messages that exploit existing insecurities.

Rapp's antidote, hard not to endorse, is that social media be used to spread love, to reinforce our common humanity. Moderates need to be heard. He points out that in places where violence has thrived, the extremists had silenced the moderates first.

The problem for both types of media is that 'what bleeds leads'. Each type inadequately covers peaceful demonstrations, vigils and efforts to marshal our better selves.

Add to that, leaders tapping into attitudes held by some in the community who hold negative views of Muslims, people of colour or other minorities. They include parliamentarians who don't necessarily believe the things they say but say them regardless, for political gain.

Then there's a kind of combative politics practiced in Australia and on display every Question Time. It's aggressive, full of blame. The language is so scorching, the politicians so busy shouting at each other they don't even see it's a problem.

Christchurch and the historical lessons about where propaganda has led before it, deliver a sharp message to our members and would-be members of parliament. Election campaigns with their overblown claims, demonisation and invented threats can create divisions when what we really need is to be brought together.