Political donations and the rise of corporatocracy 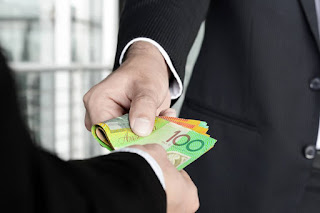 Vested interests have always sought to influence politicians but the problem of buying influence has in recent time developed into a cancer undermining the health of Australia’s democracy.

The Australian Conservation Foundation (ACF) has analysed a dump of 2018-19 donations data on the Australian Electoral Commission’s (AEC) website. It found that the fossil-fuel industry doubled its donations to the major parties the past four years.

The Coalition gets the lion’s share, but the amount Labor is ‘gifted’ is not far behind, certainly not insignificant. Drawing on four years of data from 2015-2016 to last financial year, the ACF confirms that the Minerals Council of Australia (MCA) gave money to both Liberal and Nationals-aligned entities as well as Labor entities. MCA donated to the Hunter Federal Campaign Account of the Australian Labor Party, an electorate in coal country that was retained last year by Labor’s pro-coal MP Joel Fitzgibbon (and held before him by his father, Eric).

Why? Because donations are a business investment. Donors spend money to get money in return.

How does it work?

Receiving a gift creates an obligation in the mind of the recipient and creates a positive view of the giver. Multiple donations set up an ongoing mutual relationship between the donor and the recipient. After years of deja vu politics over climate action or inaction, fossil-fuel industry donors (who have pocketed a disproportionate share of Australia’s wealth) are so successful at working on politicians that they are winning in a war against the public interest.

Back in 2012, the then treasurer Labor’s Wayne Swan - feeling the heat from the minerals lobby over the common-sense Minerals Resource Rent Tax and later the Clean Energy Act (both subsequently repealed) publicly declared ‘the rising power of vested interests is undermining our equality and threatening our democracy’.

While Labor in Opposition is working to increase transparency and accountability, as all opposition should, both major parties have gotten too comfortable with the status quo. Political donations are now part of the fabric of things.

Practice, which might ordinarily be seen as corruption, has now been normalised. We are now so deep in the practice that common sense reforms face opposition from the major parties because of back-scratching relationships spanning many years. The longer we let the current arrangement continue, the sharper the drop in trust in governments and the vicious cycle continues.

Public health is worsened by the situation. The Australian Beverages Council (which represents bottle water companies and those making sugar-added drinks) has used its profits to stymie efforts by advocates working to adopt policies that work for public health.

Both major parties wouldn’t even canvas an added sugar levy on drinks in the 2019 election campaign, despite evidence it could curb rising obesity rates and cases of life-threatening Type 2 diabetes. Interestingly, the Council gives less than it used to, it seems, because policy that threatened members’ profits has been successfully thwarted, despite the fact there is strong public support for a health levy on sugary drinks.

The Beverages Council is a known player but then there’s the influence of unknown players. The major parties received more than $100m in unsourced political donations - during the election year, the greatest single amount of so called “dark money” in two decades. Amazingly, the current federal law includes deliberate methods to evade transparency; measures that have no place in a modern democracy.

Corporate power is distorting government decisions, concludes author and former government advisor Lindy Edwards in her new book, Corporate Power in Australia. She explains how mega-corporations (from the banks and finance sector to News Corp, Coles and Woolworths) have abused their market power by working on the major parties to resist and block even the most modest reforms that serve the wider community. And making a cash donation is just one tool. Another is lobbying in a Minister’s office, which at the moment can happen without a register to know who’s meeting which elected representatives and why.

Edwards concludes that to reclaim our democracy we need to be more open-eyed about the relationship between economic power and political power. A political class now operates “in many senses, independently of the communities it is supposed to represent”.

Fixing the situation requires, Edwards says, breaking up the political class with a limit on terms in public office "so no one views it as a lifelong career", closing the revolving door from the chamber to lobbying, and making donations reportable in real time (Why not ban donations to parties and candidates all together? And, while we’re at it, only have public funding for elections).

The Commonwealth is far behind the states and territories, but across Australia there is no consistency on time-frames, who can donate and donation limits. In the ACT, there is routine disclosure for donations over a $1000 (the same threshold for disclosure in NSW compared, much less than the federal threshold of $13,800) and also weekly disclosures in the lead up to Territory elections.

Weakening ‘corporatocracy’ also requires, Edwards says, doing more to enable governments to break up companies that have become too big.
Can the laws on donations be reformed? You can see the problem. Parliamentarians under the influence of corporations including major donors are hardly going to seek greater divestiture powers.

Meanwhile, the not-for-profit sector (with as many as 600,000 organisations, many of them charities, employing 10 percent of all employees in Australia) works tirelessly to develop good ideas to shape policy agendas for positive change. But a lot of this positive energy is wasted trying to advance common good ideas because of bias towards the most powerful having more input. Not-for-profits just can’t compete with the collective financial muscle of corporate Australia, which mostly operates outside of disclosure regimes.

The federal parliament is meant to be the people’s house, but its raison d'être is challenged until there are serious moves to ensure public policy is primarily informed by public rather than private interest. It’s time to shine more light on the underbelly.